Home | News | ‘Out of date’ documentation at Sandringham

‘Out of date’ documentation at Sandringham

A report into a near-fatal lawnmower accident on the Queen’s Sandringham estate has found health and safety documentation was out of date.

An estate worker had to be rescued after he was trapped underwater when the ride-on mower fell into a lake at the Norfolk estate on 8 July.

A Health and Safety Executive (HSE) report said the man may have escaped had the machine’s roll bar been in use.

Sandringham Estate said it was considering the report’s findings.

A spokesman said: “Sandringham Estate is aware of the HSE report.

“Any actions relating to their recommendations and observations will be assessed directly with that body.” 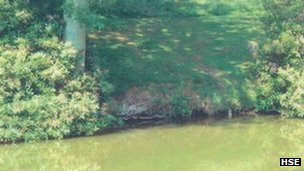 The mower slid down a grass slope into Lower Lake, trapping a worker underneath

The worker, who has not been named, was rescued by police officers Keith Hunt and Darren Wynne and head gardener Martin Woods, whose actions have been recognised by the Royal Humane Society.

He was airlifted to Addenbrooke’s Hospital, Cambridge. He was in a critical condition but has made a full recovery.

The HSE report, released to the BBC under the Freedom of Information Act, said the worker was cutting grass near the estate’s Lower Lake when the accident happened.

It concluded that the mower slid backwards down a slope into the lake, turning over and trapping the man, who was still wearing his seatbelt.

It said it was unclear why the roll bar was not deployed, adding: “If it had been in use, he may have been able to release himself from the seat and escaped.”

The mower appeared to be in serviceable condition, but the grass bank may have been slightly damp, the report said.

Alternative machines should be used for mowing sloped areas around the lakes, but they should be used with roll bars up and seatbelts worn, the report added. 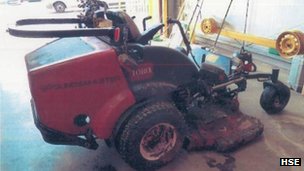 The roll bar on the mower was not in use, an HSE inspector found

In a letter to the estate manager, the HSE said it found no health and safety management issues relating to the accident or the machinery.

But it identified “a number of issues that require action”.

Some out-of-date risk assessments were still in circulation, and the HSE also recommended further training for staff and a review of lone-working across the estate.